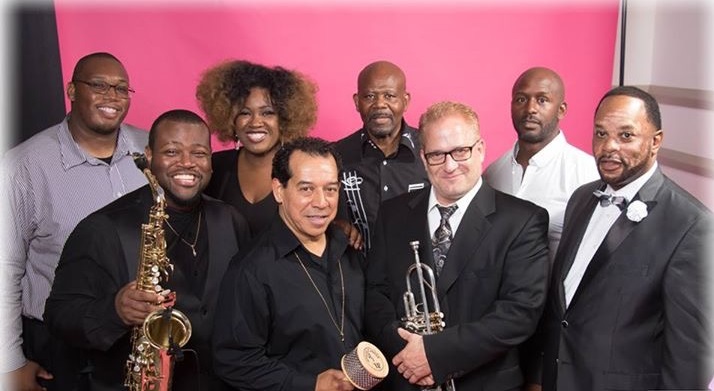 There’s a good chance that you already know the theater’s acoustics are impressive if you have attended since the event was moved to Holt in 2009 for a larger space. As a whole, really there isn’t a bad seat in the house. Here’s a glimpse of this year’s concert celebration that takes place at 7:30 pm Friday, July 26, 2019 at the Holt High School Margaret Livensparger Theater, 5885 W. Holt Road in Holt MI with Grammy nominated guitarist Doc Powell, The Miller Group from North Carolina, Lansing’s 496 West and Detroit vocalist Karla Pace.

Doc Powell performs in mid-Michigan for the first time.  His signature guitar sound is sealed in music history on over 200 songs by some of the biggest artists in every genre of music and has earned him over 12 gold & platinum records. Fifteen years of recording and touring with the Pavarotti of soul Luther Vandross, has kept him at the forefront of contemporary jazz, rhythm & blues and gospel music, contributing to some of the biggest live concert tours and major recording projects by some of contemporary music giants including; Prince, Chaka Kahn, Jennifer Hudson, Mariah Carey, Alicia Keys, John Legend, Kirk Franklin, Yolanda Adams and Mary, Mary among many others. He has also been heard in television commercials, soap operas like One Life To Live and movie soundtracks such as; Down and Out In Beverly Hills, Turner & Hooch, The Goonies, Hero and The Five Heart Beats.

The meeting between Powell and the late Luther Vandross catapulted them into world-wide performances and live recordings of some of Vandross biggest hits such as “Busy Body,” “Give Me The Reason,” “Forever, For Always, For Love,” and the infamous guitar solo on the mega hit “Stop to Love.” When Vandross penned “She Loves Me Back” and sang the line, ”This man is the Doctor”, it became Powell’s formal introduction to the music world and the name would stick.

The Miller Group returns from North Carolina.  These fellas helped to kick off An Evening of Smooth Jazz in 2005 at the Hannah Community Center in East Lansing and if there is one thing that fans remember other than the incredible music, it is that these guys love to have fun.

A group that sprouted from this community music series is 496 West.  As a collective, they have garnered a reputation of being one of the best live bands based in mid-Michigan. With soulful vocals, a powerhouse horn section, killer keys, silky strings and indispensable percussions, 496 West offers soul, smooth jazz, R&B, a sprinkling of the blues and of course, gospel jazz styles. 496 West has opened for jazz stalwarts, Grammy winners and Grammy-nominees.  They performed at the Summer Solstice Jazz festival a few weeks ago and will make a few stops across Michigan with stops in Monroe, Southfield, Muskegon and Novi this summer.

Longtime community partners and supporters are associated with this music series.  Dean Transportation has been on board before the first note was played.  The Michigan Bulletin has covered every event. Budget Printing has supported local ticket sales. A repeat attendee with front row seats purchased the first ticket for the July 26th show 5 years ago –enthusiast James Butler. Many have volunteered for 8-12 years.